Conjunctivitis in Dogs and Cats

Conjunctivitis is an inflammation of the tissues in the white portion of the eye and inside the eyelids, an area known as the conjunctiva. Sometimes associated with respiratory infections, it can also result from other illnesses, injuries to the eye or exposure to airborne irritants. Conjunctivitis can range in degree from mild to severe, sometimes resulting in minimal irritation and on rare occasions resulting in blindness.

Causes of this condition are similar in dogs and cats, except for the particular illnesses associated each species. Conjunctivitis may result from any of the following:

Examples of serious illnesses that may cause conjunctivitis include canine distemper, feline herpes virus, feline immunodeficiency virus (FIV), and bartonellosis, the organism that causes cat scratch fever in humans.

When an animal has conjunctivitis, the symptoms are usually quite apparent. These include:

An animal with conjunctivitis frequently rubs the eyes with a paw or rubs its eyes against objects, like furniture or flooring. The dog or cat may also squint with pain. Because of the frequent rubbing and possible scratching, untreated conjunctivitis and its concomitant behavior may result in permanent damage to the cornea. 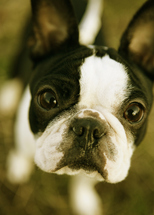 In examining a dog or cat with possible conjunctivitis, in addition to examining the eyes, the veterinarian looks for signs of respiratory or other illnesses, such as fever or runny nose, and takes a medical history. If the doctor suspects other underlying disease, the animal may require further diagnostic testing.

If the cause of the conjunctivitis seems to be localized, the doctor usually administers topical anesthetic eye drops so the animal's eyes can be examined without discomfort. The eye is looked at closely to detect any foreign object or injury. Sometimes, the veterinarian uses eye drops that will temporarily tint the eye tissue so that a scratch or ulcer can be more easily detected under fluorescent light. The doctor may also test to see if the dog or cat is producing a sufficient quantity of tears to adequately lubricate the eyes.

In the great majority of cases, conjunctivitis is treated with drops or ointments. If a systemic infection is diagnosed, oral antibiotics are prescribed. When there is a malformation of the eyelids, surgery may be necessary. If the pet has a dry eye condition, medication is prescribed on an ongoing basis. The full course of treatment should be given to animals with conjunctivitis, even if the eyes seems to rapidly improve.

While usually a fairly benign illness, in extremely dire circumstances, if the conjunctivitis cannot be treated in any other way, the animal's eye may need to be surgically removed to eliminate infection and pain.

In many cases, proactive behavior on the part of the pet owner can minimize the risk of conjunctivitis. It is helpful to limit the pet's exposure to airborne irritants, to keep the animal's vaccinations current, and to monitor the pet's active play, particularly when the animal is out of doors.

Dr. Lara Adamo earned her veterinary degree from University of Pennsylvania Veterinary Medical School. She completed her internship in internal medicine and cardiology at The Animal Medical Center, New York and her residency in cardiology at

Dr. Andrea M. Farrelly earned her veterinary degree from Cornell University College of Veterinary Medicine. She completed her internship in small animal medicine and surgery at The Animal Medical Center, New York and her